Maybe I should ask if you’ve ever thought about how games work, perhaps even about building a game from scratch? If not, turn away now; I see lots of math in your future!

In my childhood I was fascinated by Mario and other games like it. They were very simplistic and yet extremely fun to play. Mario is making a comeback with Super Mario Maker on Wii U which actually didn’t surprise me one bit.

After years of programming I tried to make a few games of my own and I quickly realized that the methodologies, working environments, strategies, planning, testing and ways of thinking were totally different.

I still wanted to learn… and using a framework wasn’t enough; I wanted to know enough to build one from the ground up. Pure foolishness right? I prefer to think about it like Witold Gombrowicz did:

Foolishness is a twin sister of wisdom.

There’s no code in this part (sorry); we need to get some things out of the way first…

So how does one start building a game? Here’s the thing, a game is not usually something one does without a team. You need a few things: a story/idea, a game genre, the game platform (web, desktop, mobile, console), a programmer and a designer at the very least. Currently the team consists of: me, myself and I …well see how that works out.

I wanted to make a mini-engine/framework/library/bundle that would enable me to build games. It needed to have some of the basic functionalities like:

You might be thinking that’s a hefty list but the ideal engine should not be opinionated on the game types you can build; besides, the list is actually pretty small and I wanted to get out of my comfort zone a bit.

I wanted to write everything in ES6 so I prepared a babel-gulp-webpack-sassboilerplate. It works with the live reload extension to facilitate development so make sure you install it in your browser. Follow the instructions to get it running.

I’ll do all the coding in another GIT repository, to keep the boilerplate intact.

For rendering I decided I’m going to use the Canvas element. It’s not interactive (I’ll go into more details about this later) so it might add more coding challenges, which is perfect. It’s generally the preferred choice for web games so it fits the bill.

The approach will be simple, we’ll have a dual purpose code base:

Creating mini games with an immature engine will quickly let us know what it’s lacking and how to improve it.

Let’s start with the first thing:

The game loop. What is it? Why do we need it?

I consider the game loop as the heartbeat of a game. It keeps everything updated and rendered correctly. Everything drawn on the screen needs to work with a single game loop if we want deterministic behavior.

You don’t want to create a shooter game and have bullets pass through players without damage, or have the players fall through the map because the player, bullet and map updates were in different loops.

I usually like to have a small class diagram before I start coding to at least highlight the main class containers. Something along these lines should suffice for now: 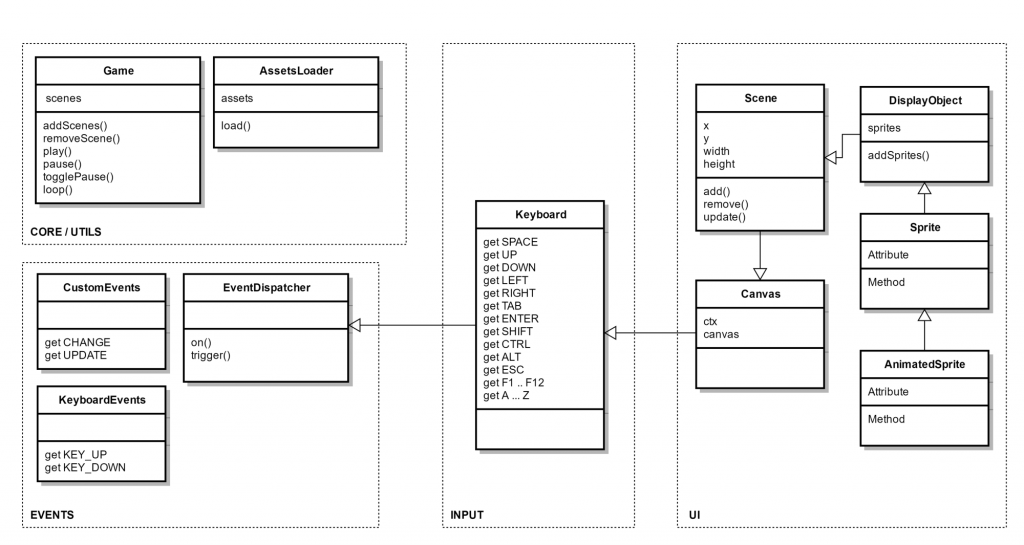 This diagram is incomplete and that’s perfectly fine, we just need something to get started, but first some explanations:

The structure might not be perfect but it’s good for our needs as any class directly or indirectly related to Canvas will be able to: dispatch events, listen for keyboard inputs and draw to the screen which is nice.

You might be asking yourself if we really need the event dispatcher; I’m actually planning on using that later to facilitate unidirectional data flow.

Next we’ll start working on all of these classes and maybe implement the basis of a mini-game to see some actual progress.